The dock bug (Coreus marginatus) is confined to the southern third of Ireland; currently all records are south of a line running from Wicklow town to Tralee. It is also confined to the southern part of Britain. This species is expanding its range northwards in Ireland, possibly due to climate change. As such it could be a good indicator of climate change. Tracking its northward expansion, seeing how new areas are opening open for traditionally southern distributed species, may shed useful information on the impacts of climate change on many Irish species.

The shrill carder bee (Bombus sylvarum) is another species with a southern distribution. It has never been recorded further north than Co. Roscommon. It needs areas of species rich grassland to survive. The Burren is currently by far the most important location for this threatened species in Ireland and Britain. Up until 2009 it had a small remnant population on the edge of New Ross town in Co. Wexford. Old maps show that this area was once known as ‘marsh meadows’ and must have been flower rich in the past. It has since disappeared from there due to increased development. 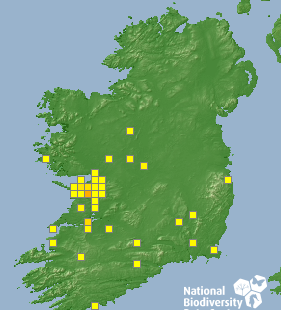 Irish lady’s-tresses (Spiranthes romanzoffiana) is an orchid native to North America, Ireland and Scotland. It is a beautiful plant with creamy white flowers arranged in a spiral. It flowers in July and August. Irish lady’s-tresses is protected under the Flora (Protection) Order, 2015 and is classed as near threatened in the Red Data List of Vascular Plants 2016. It is also assessed as ‘Near Threatened’ on European and Global Red Lists.

The comma (Polygonia c-album) is a butterfly similar in appearance to the small tortoiseshell, but having scalloped wings. The first confirmed sighting for Ireland was in 2000 when three were seen at The Raven in Co. Wexford. This followed a period of significant range expansion of this species in Britain. Since then it has expanded its range to the north and west, and is now regularly seen in counties Wexford, Wicklow, Carlow, Kilkenny and Waterford. In these counties it can be found basking on hedgerow, woodland edge and other sheltered grassy areas. 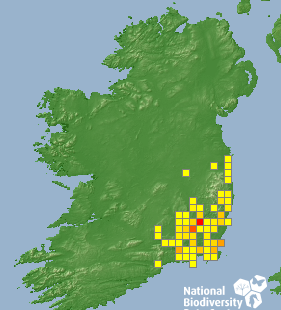 The Bank vole (Myodes glareolus) was first discovered in Ireland in 1964 near Foynes, south of the Shannon Estuary. It is likely that the species was accidentally introduced from Germany in the 1920s with machinery brought in for building of the Ardnacrusha Power Station on the Shannon. Since its introduction, the animal has spread at a rate of between 1 to 5km each year, and today it’s range extends in an arch from Waterford Harbour to Lough Ree and Castlebar in Co. Mayo. There is no doubt but that the bank vole will spread to all parts of the island in due course. 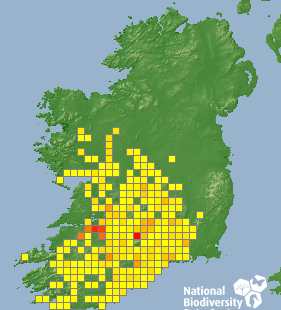 The slow-worm (Anguis fragilis) is a legless lizard, snake-like in appearance, that can grow up to 50 cm in length. Slow-worm are not native to Ireland, but populations have established at two sites in the north-east Burren, in counties Clare and Galway. They were first seen in the 1970s and the speculation is that they may have escaped having been imported initially as pets. They hibernate for the winter months and become active from April to September. They are generally difficult to see, preferring to remain hidden under rocks, but occasionally they may be found basking in the sun. 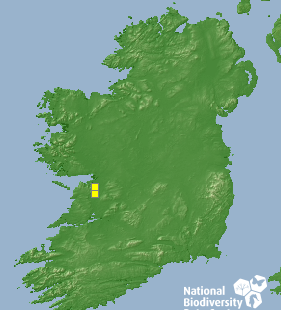 The Irish damselfly (Coenagrion lunulatum) was first recorded in Ireland in 1981 from a site in Co. Sligo. Since then it has been found at more than 40 sites mostly in counties Fermanagh, Monaghan, Armagh and Tyrone. The Irish damselfly occurs on sheltered lakes and large pools on cutover bogs that have clear water with submerged aquatic vegetation. Most of the colonies that have been found are of small populations, and more recently some of these populations appear to have become extinct. Its population is described as ‘Vulnerable’ in the Red List conservation assessment completed for Ireland. 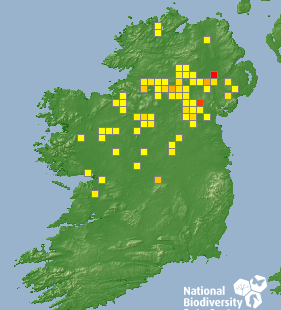 St Dabioc’s heath (Daboecia cantabrica) is one of around 15 wildflowers known as the Lusitanian Flora. This unique collection of Mediterranean plants came originally from the Iberian Peninsula (North Spain and Portugal), and in Ireland most are found in the south and west. They are mainly absent from Britain. It is unlikely that they have survived from before the last Ice Age and there is no conclusive explanation for their presence here. St Dabioc’s heath grows on dry heaths, acid soils and rocky moors where it blooms from May to October. 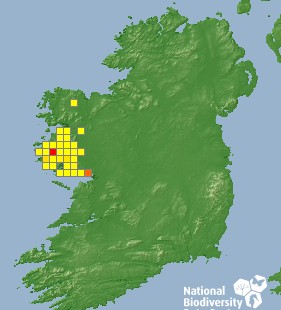 The gatekeeper (Pyronia tithonus), a butterfly that looks rather like a small meadow brown, is confined to the southern and eastern coasts in Ireland between west Kerry and county Wicklow. It is found in warm sites with woody shrubs and rough grassland such as hedgerows and woodland rides and clearings. This species is abundant in Britain and expanding north making the situation in Ireland a puzzling contrast. 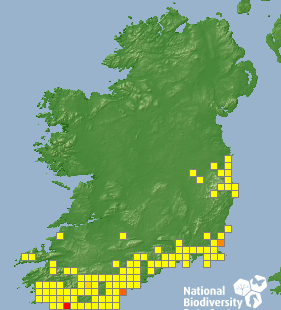 The Kerry slug (Geomalacus maculosus) is found in southwestern Ireland (including Co. Kerry), but is more widespread in north-west Spain and from central to northern Portugal. However, it is not found anywhere between Ireland and Spain. It needs high humidity and acidic soil and feeds on lichens, liverworts, mosses and fungi, which grow on boulders and tree trunks. It is protected under the Wildlife Acts and the EU Habitats Directive, with seven Special Areas of Conservation being designated for its conservation. 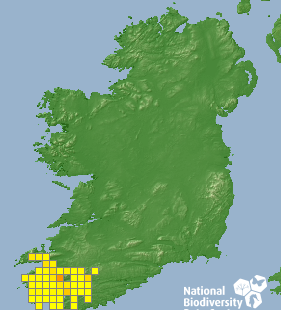