Invasive non-native plant and animal species are the second greatest threat to biodiversity worldwide after habitat destruction. Ireland is no exception, and many species that have newly arrived to Ireland has disrupted local ecosystems and threaten our native biodiversity. New regulations have been introduced in the European Union and transposed into Irish law, to mitigate the threat posed by invasive alien species. There are many contenders for Ireland’s most unwanted species, but here we have profiled 10 species which we feel are particularly unwelcome.

Giant hogweed (Heracleum mantegazzianum) is a flowering plant up to 5m tall that is native to the Caucasus, between the Caspian and Black seas. It was a popular Victorian garden ‘curiosity’, first introduced to Britain and then Ireland in the 19th century. The first noted escape from cultivation was in Dublin in 1902-1903, and it has since become established along river banks and other areas of damp waste ground. Single plants may grow initially, but due to the very large volume of seeds it produces it will spread rapidly in an area. It is a public health hazard due to its toxic sap which causes severe dermatitis (Photograph: Seamus Forde). 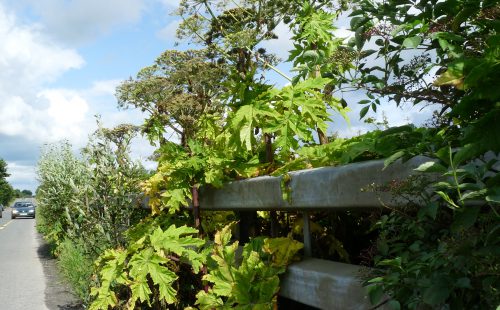 The American mink (Neovison vison) was introduced to Ireland in the 1950s for fur farming, and the first reports from the wild of escaped animals followed shortly after that time. There have also been a number of deliberate releases into the wild. Breeding populations were established at a number of locations by the 1980s and by 2009 the species was considered to be widespread everywhere except the far west. Since then, it is confirmed to occur across the island including some of Ireland’s offshore islands. Mink prey on crayfish and waterbirds, and the impact they are having on rare ground-nesting birds is if of particular concern (Photograph: Jonn Lefffman) 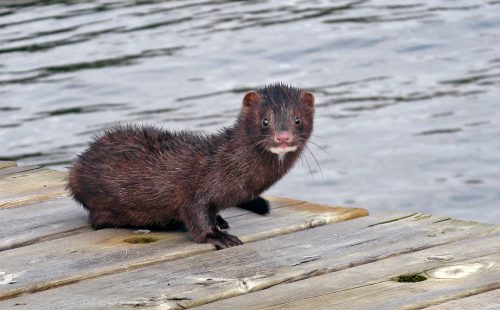 Japanese knotweed (Fallopia japonica) was an extremely popular garden plant in the 19th century, and was even awarded a gold medal in 1847 by the Society of Agriculture & Horticulture at Utrecht as “the most interesting new ornamental plant of the year”. It was introduced into the wild in Ireland in the 1900s and was still sold in garden centres until the 1980s. Its spread to its current range in Ireland has been through deliberate planting and garden discards with the plant then spreading vegetatively from those areas. All plants in Ireland are thought to be male sterile and its spreads through rhizomes and vegetatively, from fragments as small as 2cm. Japanese knotweed has become a cause for great concern due to potential to undermine roads and damage buildings (Photograph: Colette O’Flynn). 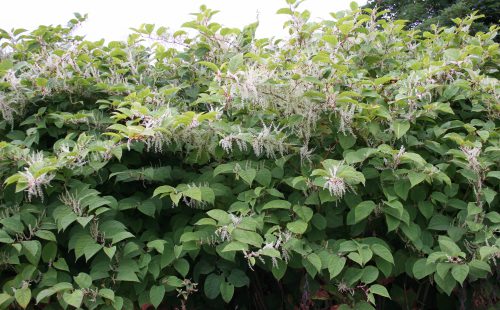 Rhododendon (Rhododendron pontincum) is a densely branched evergreen shrub, up to 10m tall, with beautiful mauve/purple flowers in spring. Originally from southern and south-eastern Europe it has long been cultivated in gardens since the early 1800s and was thoroughly established at a number of locations by the late 19th Century. This expansion in range has continued through to the present, and it now cloaks many hillsides and woodlands in upland areas. Where it grows it crowds out native plants and forms dense monocultures, and spreads rapidly as each individual plant can produce up to 1 million seeds. Rhododendron has become a major problem in Ireland posing a particular threat to oak woodlands. Effort at its control and eradication from some of our protected areas have been ongoing since the 1980s with mixed results (Photograph: Colette O’Flynn). 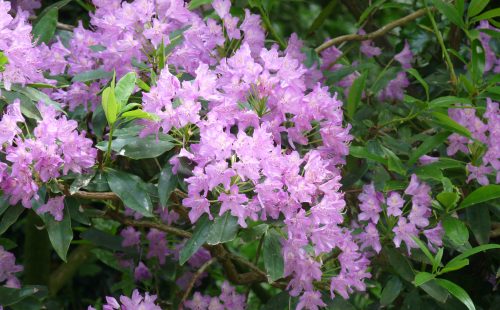 Grey Squirrel (Sciurus carolinensis) were first released into Ireland at Castle Forbes in Co. Longford in 1911, and have since naturally dispersed across the eastern half of the country. The River Shannon delineates their western distribution, with the river acting as a barrier to movement, but the extensive blanket bog and poor hedgerow cover in the west probably make it less suitable for this species. Grey squirrels are known to outcompete our native red squirrel and cause serious economic damage to forestry. In recent years, grey squirrel have retreated from parts of the midlands, possibly due to the arrival of the pine marten, and red squirrels have been quick to recolonise these woodlands (Photograph: Christine Cassidy). 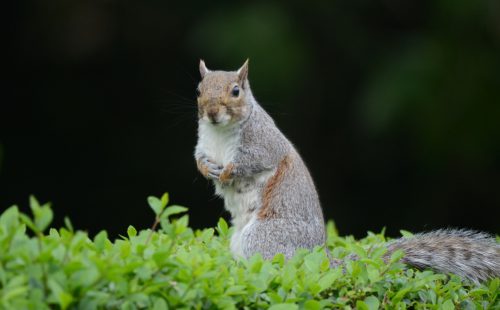 The Asian clam (Corbicula fluminea) is a small olive-brown freshwater mollusc, usually less than 25mm in diameter, with a thick shell marked with evenly space concentric ridges. It is native to temperate Asia, Tropical Asia, Africa, Australasia. It was first recorded at St. Mullins on the River Barrow in 2009 but has since been found in the Shannon river system at Lough Derg and Carrick on Shannon. It is thought to have come into Ireland, overland, by transportation of leisure craft from Britain. Where Asian clams establish they can occur in extremely high densities thus potentially altering the aquatic ecosystem and impacting on native biodiversity (Photograph: Colette O’Flynn). 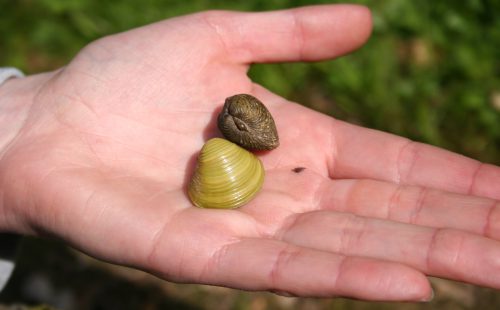 The Coypu (Myocastor coypus) is a large, herbivorous, semi-aquatic rodent native to South America. It can weigh 5-9kg and is about 1m in length from head to tail. It has dark fur and a white muzzle, a long cylindrical tail and small ears. It also has distinctive bright orange-yellow incisor (front) teeth, and webbed hind feet. Coypu were introduced into other European countries for fur farming in the 19th Century, but they are very recent arrivals to Ireland, having been recorded in the wild only since 2010. Where coypu have become established in Europe they can quickly build up large populations, impacting significantly on riverside vegetation and undermining riverbanks and flood defenses through burrowing (Photograph: Shutterstock). 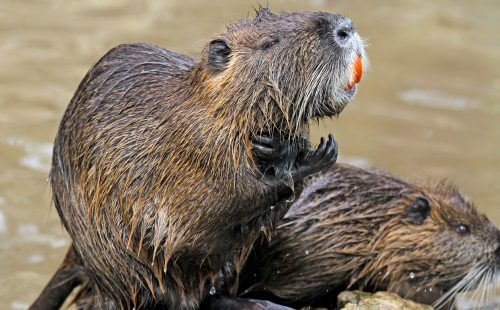 The American skunk cabbage (Lysichiton americanus), a native of western North America, has large leathery leaves and foul smelling greenish flowers. It grows in wet soil, and is tolerant of both in shade or full light. It is long-living, something up to 80 years, allowing it to form dense, interminable patches that exclude other vegetation. It can have a major impact on aquatic and riparian vegetation particularly in ecologically sensitive wetland sites. In Ireland it is an occasional garden escape. It is now not as commonly planted as a garden plant as in the past, but was deliberately planted at Woodfield Bog, Co. Offaly in the 1930s. Its spread in Ireland is likely to be by natural means, and it may not occur for many years after it becomes established. 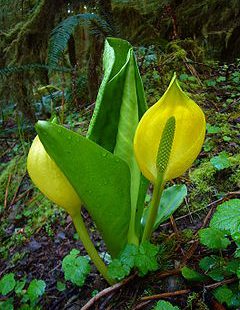 Himalayan balsam (Impatiens glandulifera) is native to the foothills of the Himalayas from north-west Pakistan to northern India. It was introduced to Ireland as an attractive garden plant and sown by beekeepers as a source of food for bees, becoming naturalised in the early part of the 20th Century. It spreads rapidly by means of explosive seed heads and out-competes native species. On damp ground, particularly along rivers and streams it can form extensive dense stands outcompeting native vegetation and blocking access to river channels (Photograph: Liam Lysaght). 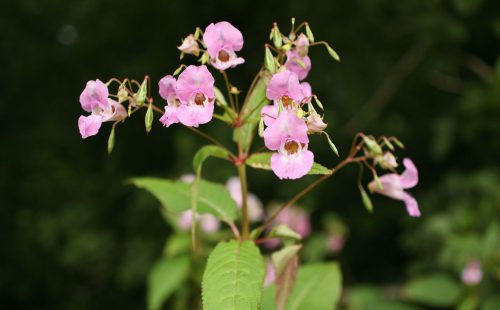 Greater white-toothed shrew (Crocidura russula) was first discovered in Ireland in barn owl and kestrel pellets collected from County Tipperary in 2007. It is thought to have been in the country since at least 2004 probably accidentally introduce from France in animal fodder. Since its arrival it has spread across counties Tipperary, Limerick, Cork, Waterford, Kilkenny, Laois and Offaly, and has even crossed the River Shannon into County Clare. The spread of the Greater white-toothed shrew in Ireland is a major concern for the long-term survival of the native pygmy shrew, as the pygmy shrew has already disappeared from extensive areas where the greater white-toothed shrew has colonised (Photograph: Ruth Carden). 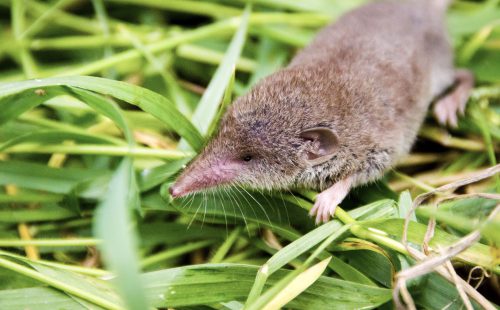