The chough (Pyrrhocorax pyrrhocorax) is a member of the crow family with jet black plumage and bright orange bill and legs. It occurs along the rocky Irish coast from Hook Head in Co. Wexford clockwise to Malin Head in Co. Donegal. It is largely absent from the north and east coast of the island. It feeds on insects and invertebrates of short grasslands that have been grazed by livestock, and nest in cliffs and old buildings along our coast. In winter birds congregate at favoured sites, where they occur in good numbers. 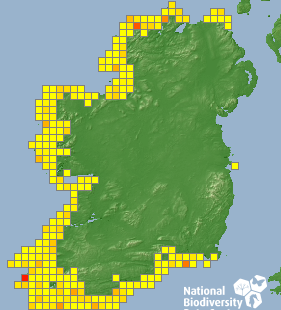 The lesser horseshoe bat (Rhinolophus hipposideros) is the only Irish bat species with a limited distribution. It is confined to the six western counties of Mayo, Galway, Clare, Limerick, Cork and Kerry. The unusual distribution of this species is probably due to the milder temperature in these six counties due to the influence of the Gulf Stream and to the greater availability of natural caves, particularly in counties Galway and Clare. 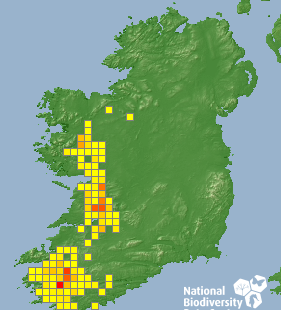 The brown or European hare (Lepus europaeus) is an introduced invasive species to Ireland, not to be confused with the native Irish hare Lepus timidus hibernicus, which is Ireland’s only native lagomorph. The brown hare is native to much of continental Europe but was introduced to Ireland on at least 15 times at different locations from 1848 to the 1890s for the purpose of field sport. All of these local populations have become extinct except for two populations remaining in Northern Ireland, in Mid-Ulster and near Baronscourt, Co. Tyrone. 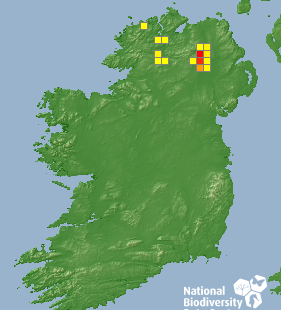 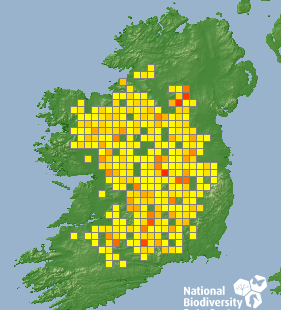 The emperor (Anax imperator) is a large powerful dragonfly, up to 8cm in length. It flies from June to the end of August and frequent well-vegetated natural and artificial ponds and small lakes. The emperor dragonfly is a relatively recent arrival to Ireland, first recorded in 2000 from Co. Wexford. Since then, it has become a well established resident, expanding its range across the country. It can now be found at many locations in the southeastern half of the country. 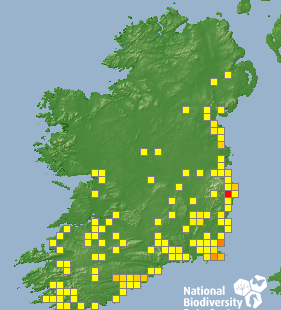 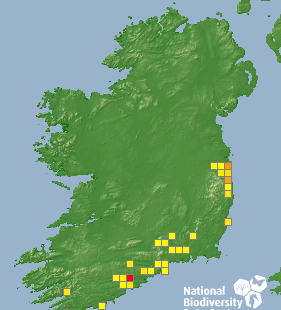 The Burren green (Calamia tridens) is a spectacular emerald green, ermine-like moth that is confined to the Burren region of counties Clare and Galway. It occurs nowhere else in Ireland or Britain. It is found on calcareous grassland and sand dunes and the larvae feed on Blue Moor-grass Sesleria caerulea. Adults have been recorded in August. Its conservation status is described as Near Threatened. 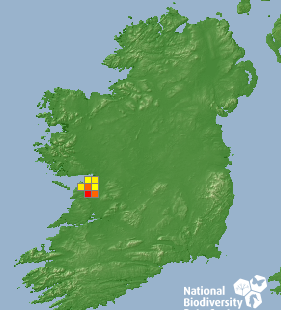 The narrow-mouthed whorl snail, strangely more commonly known by its scientific name, Vertigo angustior, is a small species of snail that is protected under the EU Habitats Directive and that has been the subject of many a controversy about nature conservation in Ireland. It has very specific habitat requirements, provided by good quality fixed dunes along the north and west coast and marshes in the midlands. The Irish population is of global significance. 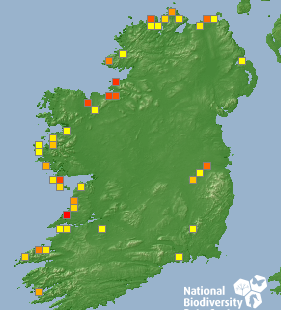 The common eider (Somateria mollissima) is a large duck that is seldom seen far from the sea. About 100 pairs of eider breed along the north and northwest coast of Ireland, usually on islets. In winter it disperses from the breeding areas but the majority of sightings are still on coastal waters off the north coast.

The freshwater pearl mussel (Margaritifera margaritifera) is a bivalve mollusc found in clean, fast-flowing rivers, and occasionally in lakes. It is a highly threatened animal, categorised as critically endangered in Ireland and across Europe. 90% of all freshwater pearl mussels died out across Europe during the 20th century, but some populations linger on some of Ireland’s less polluted rivers. Because it requires high quality, unpolluted rivers, it is of serious conservation concern. 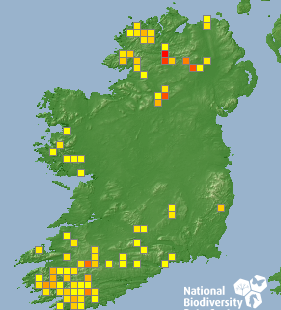