Ireland’s biological diversity is under pressure like never before. The ongoing programme of conservation assessments conclude that on average 20% of the species that have been assessed are considered to be at risk of extinction in Ireland. Extinction is not a new phenomenon as Ireland has already lost many species. Here is an account of 10 species that are already considered extinct in Ireland.

The last Irish records of Meadow saxifrage (Saxifraga granulata) as a native were from Co. Wicklow in 1985 and Co. Dublin in 1986. Despite repeated searches of these sites specifically for the species it has not been refound. It was officially declared extinct in the Red List of Irish Plants in 2016. Meadow saxifrage grows in moist but well-drained, often lightly grazed, base-rich and neutral grassland. You also find it in unimproved pastures and hay meadows. S. granulata has been lost from many sites in southern England since the 1962 Distribution Atlas, as grasslands have been improved. Naturalised populations include a double-flowered cultivar (Photograph: H. Zell). 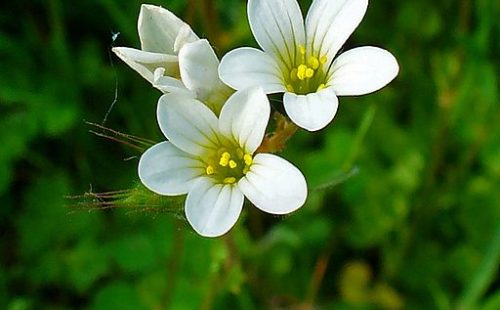 The Mud pond snail (Omphiscola glabra) was a rare mollusc in Ireland. It was know from a singly colony discovered near New Ross, Co. Wexford in 1929 and it occurred here until 1979. The site was drained after that time, and the species became extinct (Photograph: David Fenwick, www.aphotofauna.com/). 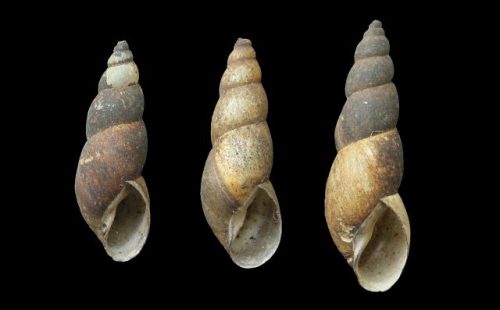 The Grey Wolf (Canis lupus) arrived in Ireland at the end of the last Ice Age. It was common in our landscape through the Mesolithic, Bronze Age, Iron Age and Norman periods and at one time the population may have reached 1,000 animals. During Cromwell’s rule bounties for wolves were initiated and so began the final path to extinction. The last wolves disappeared from Ireland in the late 18th Century, probably sometime between 1770 and 1786. Wolves continue to exist in most European countries (Photograph:Gunner Ries). 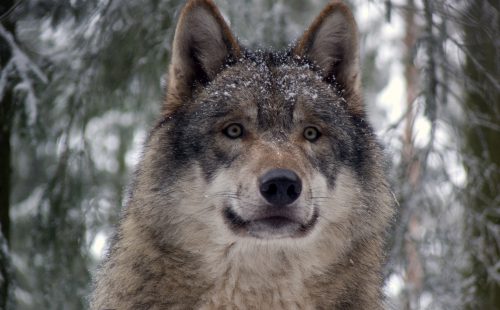 The Corn Bunting (Emberiza calandra), a bird about the size of a skylark, once bred across much of the agricultural lowlands of Ireland but is now extinct as a breeding species in Ireland. It feeds on seeds and grain, so the demise of the mixed cropping farming of the past resulted in the decline of the corn bunting. It was last recorded breeding from County Mayo in the mid-1990s. Corn bunting still breed in Britain and much of Europe (Photograph: Steve Riall). 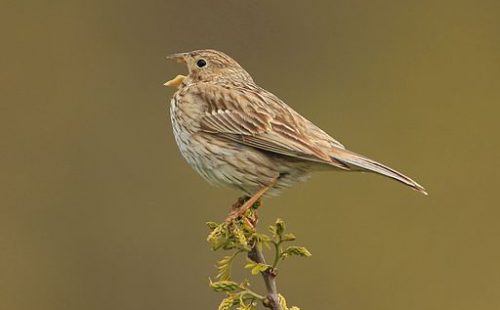 The Hornet Moth (Sesia apiformis) is a clearwing moth that does a very good job of pretending to be a real hornet or a social wasp. It’s a large day-flying moth that even mimics a hornet’s jerky flight style. In nature, mimicking someone bigger and more aggressive than you is a common trick as it reduces your chances of being eaten! Unlike hornets or wasps, the Hornet Moth is vegetarian. Its larvae feed on tree tissue just under the bark (Poplars are their favourite). The Hornet Moth was last sighted in Ireland in 1946, but causes of its apparent extinction are unknown (Photograph: Lukas Jonaitis). 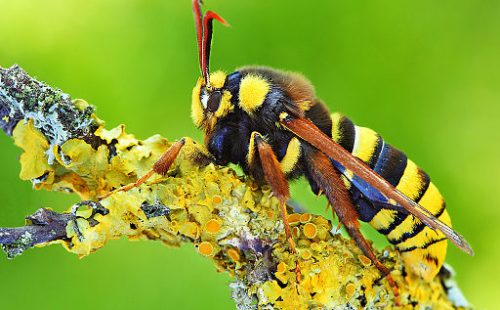 The Mountain Ringlet (Erebia epiphron) is a mysterious drab brown butterfly that was recorded from counties Mayo and Sligo during the 19th Century, but has not been seen since 1901. It was found on the higher slopes of mountains, associated with herb-rich Nardus grassland, and reputedly only flew in bright sunshine. Despite extensive searches, it was rarely found, and there are only a handful of specimens in collections. And even the origins and authenticity of some of these specimens have been called into question. It is most likely by the time it was found in the late 19th Century it was already on the verge of extinction (Image: National Museum of Ireland).

The Spiral Chalk-moss (Pterygoneurum lamellatum) is one of 596 different species of moss recorded in Ireland, but 35 of these have now gone extinct from the island. The Spiral Chalk-moss was recorded from in and around Dublin city during the mid-19th Century, where it grew on mud-capped stone walls, a habitat that has now disappeared. This species has not been recorded in Ireland since 1870 (Photograph: Koen Vanderkerckhove, BryoLim). 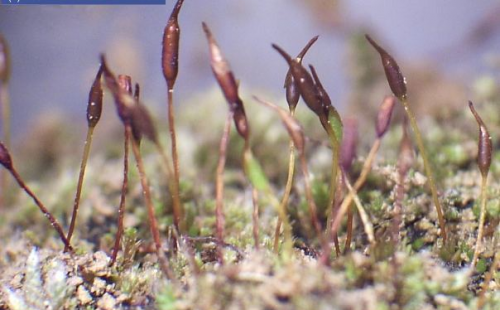 The Great Auk (Pinguinus impennis) was a medium-sized, flightless bird, numbering in the millions, which once roamed the North Atlantic. Flightlessness made it vulnerable to human exploitation and this occurred on a significant scale from the 8th century onwards. Its ease of capture and large numbers made it a convenient source of food for early explorers crossing the North Atlantic. The last birds were killed on the island of Eldey off the coast of Iceland in July 1844. Two Great Auks were captured by a fisherman off Brownstown Head, Co. Waterford in 1834, and one was held in captivity for a number of months, until it died. The animal was stuffed and the specimen now resides in the Zoology Museum of Trinity College Dublin, one of only 18 specimens that remain (Image by John Gerrard Keulemans). 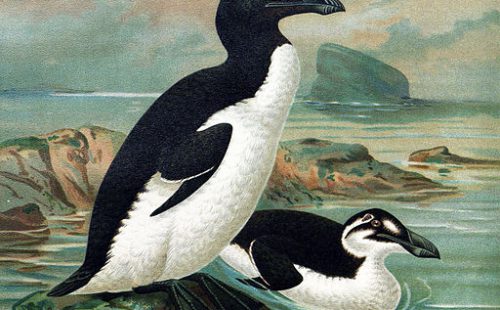 Holy grass (Hierochloe odorata) is an aromatic grass that is native to northern Europe and North America. It is very widely used in herbal medicine. In Poland it is known as Bison Grass where they use it to make Bison Grass vodka (Żubrówka). Holy grass arrived in Ireland and managed to establish itself at one marsh on the SE corner of Lough Neagh. Unfortunately that was as far as it got. It was last recorded at that marsh in 1992 and despite extensive searches has not been seen since. It was officially declared extinct in the Red List of Irish Plants in 2016 (Image: Bilder ur Nordens Flora). 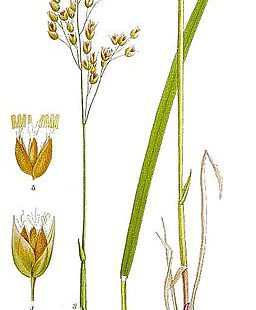 Nomada sheppardana is a tiny little bee that measures less than half a centimetre long. It is a cuckoo or cleptoparasite which means it parasitises the nests of other bee species in the genus Lasioglossum. Nomada sheppardana is relatively commonly in the far south of England. It was never abundant in Ireland as far as we know. The only Irish record is from Lucan in 1902. We can only assume it was more widespread but that it disappeared without being recorded. Or perhaps it’s still out there waiting to be rediscovered! It is one that is likely to reappear in Ireland as a result of climate change (Photograph: Steven Falk). 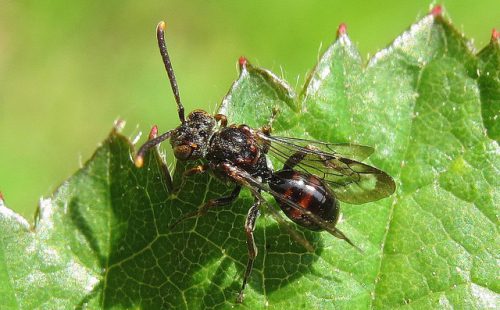